The 21-storey building that collapsed today at Musikiu Junction by Gerard Road, Ikoyi, Lagos, was sealed by the State government last year to “prevent calamity”.

Unfortunately, it appears the building was later unsealed and construction continued until it collapsed today, November 1, at about 1:30 pm.

In July 2020, it was reported that Sanwo-Olu had sealed the Gerard, Ikoyi high-rise. 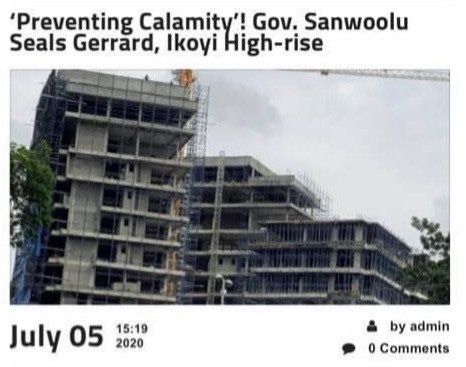 At the time, a source was quoted as saying that the State Government took the action to seal the building in order to ensure that what happened with Lekki Gardens Estate when its on-going six-storey building collapsed on March 8, 2016 would not be witnessed again in the state.

The source said: “It is unheard of that the owners of the Ikoyi project in question would embark on such a capital intensive project without obtaining required approvals for a project as massive as that.

“Gone are the days of negligence on the part of the government when people flout the law. Sealing up the project is law taking its due course.

“It does not benefit the state to stop economically viable projects like the project on Gerrard Road in Ikoyi, but the responsibility falls on the government that all rules and regulations guiding such buildings are strictly adhered to.

“What the government has done is to halt further construction with a view to assessing and evaluating the extent to which the builders had adhered to the building code. The state will take it up from there.

“The government will not fold its arm and watch people behave recklessly without order and accountability. We are talking about people’s lives here. The state will no longer tolerate such attitude from anybody no matter how highly placed they may be.”