Nigerian comedian Ayo Ajewole, popularly known as Woli Agba, has reacted to speculations that he and his colleague collected money from the recent visit to the Vice president Osinbajo at the Aso villa.

Naijaloaded recalls that Woli Agba and his colleagues were attacked over the recent visit to Vice President, noting that they are all fighting for his interest.

Reacting to the criticisms, Woli Agba said one of the problems of Nigerians is that they conclude every slightest opportunity after seeing the numerous pictures they took.

Woli Agba said people should stop thinking like a programmed robots and desist from cooking up stories about who is not present at the meeting.

After mercilessly being dragged on social media, Woli Agba, in a post on Instagram, said he did not collect a dime on the trip, and the motive behind the visit has nothing to do with a brown envelope as he didn’t receive anyone.

Woli Agba said that the purpose of the visit was for the skit makers award, but they seized the opportunity to present the youths’ grievances and hope for positive change from the government.

The comedian said the term ‘Programmed robot’ was a misconception and apologised for using the word, adding that he is a member of the sorosoke generation and unwilling to be manipulated against what the youth stand for.

I did not collect a dime on this trip.
The motive behind my visit to the villa has nothing to do with an envelope and none was received by me.
Though the reason for our visit to the villa was for NSIA, yet, we seized the opportunity to first present the grievances of we, the youth. #policebrutality #twitterban among others, while we hope for positive change from the govt.
The clause “programmed robot” in one of my comments was a misconception and I sincerely apologise for that.
I am a youth and a member of the #sorosokegeneration and I am unwilling to be manipulated against what we all stand for.
I preach good values: Morals, Respect and Integrity (evident in my works).
sorosokegeneration we mooooovvveeeeee. 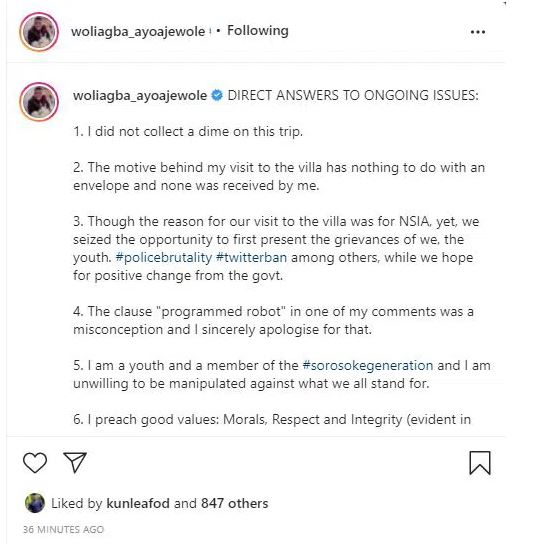